The kind of person who owns a cargo bike

A while back, I tweeted about buying a cargo bike.

I like imaging buying a cargo bike, because it lets me see myself as a better person.

I liked the idea of having a cargo bike because I wanted to be the kind of person who owned a cargo bike. As my friend Chris put it, “I’d carry everything on it. I’d never need to use the car. It’d be amazing.”

But I wasn’t really looking for one.

Not to say I hadn’t looked. I was particularly enamored with the cycle truck style. If money were no option, the Ahearne Cycle Truck would be my choice — truly a thing of beauty.

So when a fully loaded Surly Big Dummy appeared on Craigslist with a reasonable price, I debated a while, and then jumped on it. It’s not necessarily what I would buy if I was building one from scratch, but it really is well set up for the urban cyclist: locking wheels, fully set up Extracycle racks, and a massive U lock with attachment. 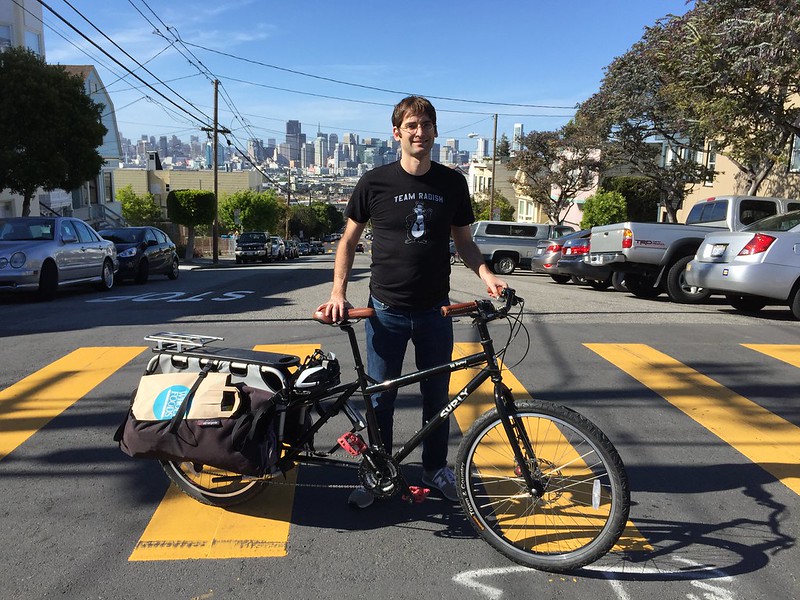 That is to say, I am now the kind of person who owns a cargo bike. From the first day, it’s been a fun addition to my collection of bikes (I now have two in San Francisco and mumble mumble some in Minneapolis).

You can’t want to go places quickly on the Big Dummy. You just pedal. Reaching maximum speed is like what I imagine driving a big rig truck is like. You have to shift up to your highest gear in stages, over a space of blocks. As the guy I bought it from put it, the bike is so long, you have to parallel park it. Getting up my hill with its 10% grade is hard, even unloaded, but the low gear is low enough to make it possible.

Cargo bikes are more common than they used to be, but even today, it is a sight worth remarking on. I’ve never gotten so many comments or seen so many smiles while riding a bike. For some reason, middle aged black guys seem to really enjoy it.

I joked that if I owned a cargo bike I’d bike to the farmer’s market every weekend. And you know what? I have biked to the farmer’s market a lot more since buying it. I’m not sure I’ve ever bought enough such that it would, strictly speaking, be impossible to haul back on my regular bike (using two paniers and a backback). But the cargo bike makes it a cinch, and since I have it, I use it.

After all, I’m the kind of person who owns a cargo bike.